In order to demonstrate how separated bicycle lanes could work on King Street between Erb and Central Street, I have made a model of King and Erb, one of two major intersections in the study area.  The other is King and Bridgeport, which is nearly identical but rotated 180 degrees.

Key features of the design:

Visibility:
As the northbound bicycle lane approaches the intersection, it moves closer to the roadway to improve visibility of cyclists, and no objects are placed on the buffer between the bike lane and car lane.  At the intersection, the bike lane curves away from the street in order for to make a better angle of conflict between right-turning cars and cyclists.  If the bicycle lane continued straight, cyclists would be approaching right-turning cars in their blind spots.

These measures are not taken for the southbound lane since Erb is one-way eastbound so there are no turns across the bike lane during a green light for King.

The bike lane is also paved in red asphalt to make it more obvious to drivers and pedestrians.  The bicycle crossing is shown with “Elephant’s feet”, a series of squares marking the path of bicycles through the intersection. 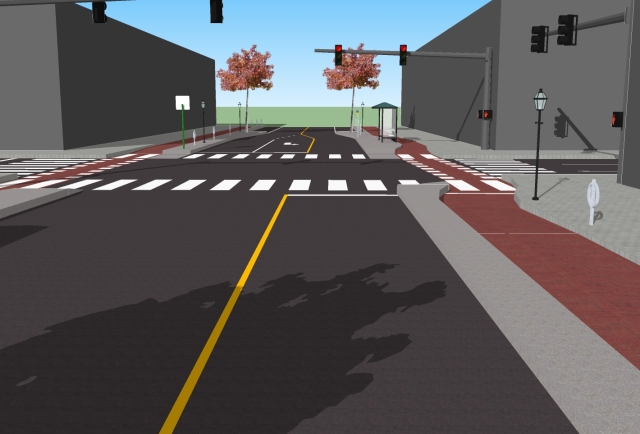 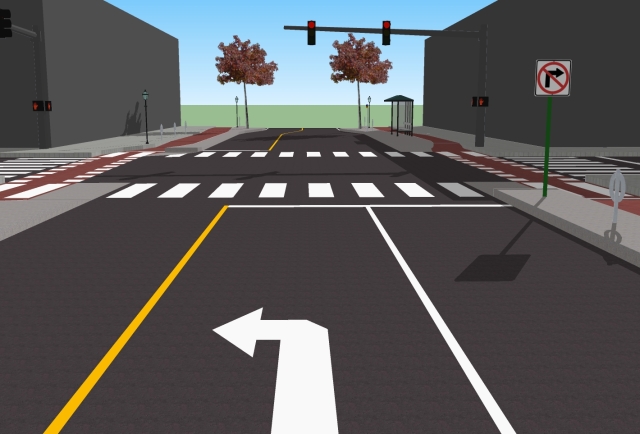 The bicycle lane has a width of 2.0 metres, which is the absolute minimum width to allow a faster cyclist to overtake a slower one within the lane.  The exception is behind the bus stop, where it narrows to 1.5 metres in order fit in the bus platform.  Cyclists would have to wait to overtake until after the bus stop.

Buffer width:
Where the bike lane is adjacent to parking, the bicycle lane buffer is 0.8m which is just enough to completely protect cyclists from opening car doors.

Bus stops:
The bicycle lane passes behind bus stops to completely separate buses from bicycles.  Cyclists can pass the bus stop even when buses are loading passengers, thanks to the island platform. In order to maintain visibility for cyclists approaching the intersection, bus stops need to be on the far side of the intersection.  The southbound stop has a wide enough lane that cars can pass stopped buses, but the northbound stop does not.

What do you think of this vision of King Street?

PS. Feel free to use the images in this post for any purpose, with or without accreditation.

20 thoughts on “A vision for King Street in Uptown”