In my last post, I showed how placing extra road space between the bike lane and traffic lanes could increase people’s feeling of safety on Keats Way in Waterloo.

But for many, that would not be enough and they would continue riding on the sidewalk, or not riding at all.

So how could we further improve the feeling of safety? The answer is to introduce a physical barrier between cars and bicycles, and to extend separation right up to intersections. But when bicycles are separated from the roadway, intersections must be designed very carefully, since cyclists will be less obvious to motorists. For guidance on intersection design, I looked to The Netherlands.

There, the bike lane is typically next to the sidewalk, separated from it by a sloped curb, and separated from motor traffic by a raised island where trees and streetlights are located. It is also paved in red asphalt, to make it more visible and distinct from the roadway or sidewalk.

At a minor cross-street such as Karen Walk, one option is for the streetscape to continue through the intersection, making it obvious that pedestrians and cyclists on the main street have priority over the cross street. The design is safe because vehicles slow down to cross the raised sidewalk and bike lane. The main issue with the design is that while cars are waiting for a gap to enter the roadway, they partially block the bike lane.

So at busier cross-streets such as Amos Avenue, the bike lane would be bent away from the roadway to provide space for a car to wait without blocking anyone. 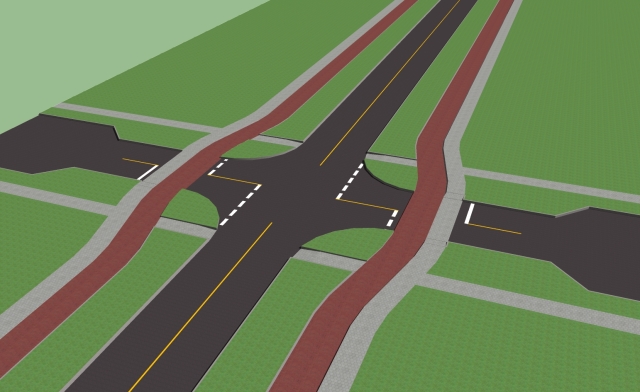 Unfortunately, we couldn’t just transplant the Dutch design onto Keats Way, because the bike path would be located where the trees and streetlights currently are. Moving them would be very expensive unless the street were being completely rebuilt anyway.

So here’s my attempt at adjusting the current roadway layout to make it feel more safe.

I extended the curbs out such that the intersection is the minimum possible size and vehicles must turn slowly. I bent the bike lanes away from the street slightly, so more of the corner is protected by the raised buffers and there is space for left-turning cyclists to wait without blocking the bike lane.

In order for the concrete separation to extend to the intersection, the left turn lane had to be sacrificed. But Keats Way never seems busy, so it would likely not cause problems.

At public consultations for separated bike lanes in Toronto, I have suggested the Dutch intersection design, but city officials said that it would be unacceptable because the raised islands would make snow clearance very challenging.

Does anyone know how the raised islands inhibit snow clearance?  Regular sidewalk plows could clear the bike lane, and there is plenty of space between the bike path and the car lanes to pile snow from the main roadway.  Surely the concerns about snow clearance could be addressed rather than immediately dismissing the design.  After all, it does snow in The Netherlands too.

3 thoughts on “If Keats Way were in The Netherlands…”