I punched him because he’s so impatient and couldn’t wait for me to write this post about biking to go cross country skiing.  He was in such a rush, he even made a spelling mistake!

Over the last three years, I have become pretty focused on using my bike as my primarily means of getting around Kitchener-Waterloo.  My wife and I have three teenage sons, and until recently, two vehicles.  I have been advocating getting rid of the car and just having one vehicle, for a couple of years now.  My wife takes the mini-van to work, and my oldest son used to take the car to work.  My idea of going down to one vehicle has been met with some resistance!  I have finally succeeded, mostly thanks to my middle son for wrapping the car around a tree!  Fortunately, there were no injuries, but we now have only one vehicle!

Here’s a picture of the car. 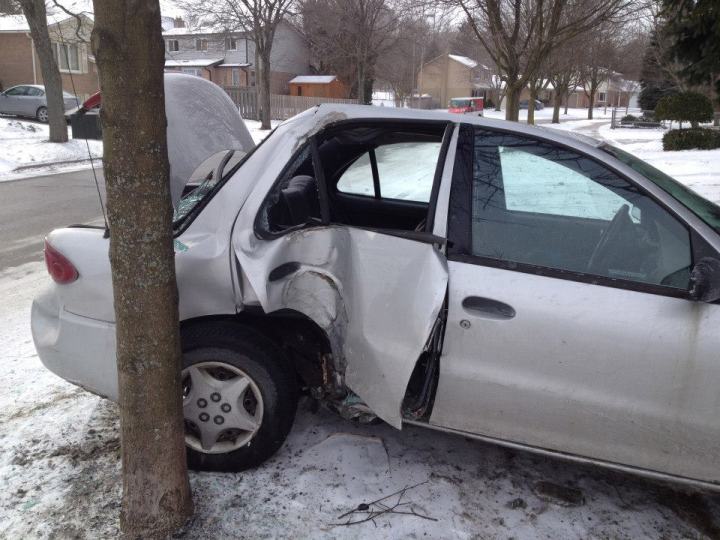 This was a long introduction to say that, I used to bike most places because I wanted to.  However, I always had the option of taking the car, if I was running late, or was a bit tired.  Now, I often don’t have another option.  It’s made me come up with some innovative ways to haul things around.  The picture of the skis on my bike is actually from last year.  I only rode to a ski trail once last year.  It was a bit of a novelty.  Since mid-January, if I’ve wanted to ski, I’ve usually had to bike.  I’ve made the trek out to Schneider’s Bush several times, with my skis strapped to my bike.  I get a few strange looks, and a few of my skiing friends waffle between being impressed and thinking I’m a bit nuts!

Here’s a few pointer, if you’d like to try.  I like to have the tips of the skis up front.  I tried them the other way around once, and They ended up with quite a bit of slush and dirt on them.  I’ve also discovered that it’s best to have the tips just ahead of the handlebars.  If I have the tips any farther forward, the skis are too thick where my legs pass the bar.  The bindings would be the worst part to have between your legs!

8 thoughts on “I Punched Graham This Morning!”