Remember how that feels?  I’m sure many of you have had a bike stolen at some point, it’s kind of par for the course in bike ownership.

There’s the hassle of reporting it. Calling the police. Calling the insurance company. The feeling of loss, especially if the bike holds sentimental value. .

Wondering, what am I going to ride tomorrow …

Then there’s that feeling that another human being took something that was yours.  Someone invaded your personal space and took something.

Unless of course it happened to snow in the morning. And you can see the boot prints leading up to your driveway, up the steps to your porch. The bolts ripped out of your brick house where your Brodie Force commuter once lived. Then you see the two familiar tire prints heading off down the street.

It looks fresh. You follow, kind of wondering what if it’s someone on my street? What if I find him .. or her. You’ve run two blocks now, you’re breathing hard. The path disappears. Dang, there’s no snow on King Street.

You walk back home and all you can do is a crappy facebook vent. You hit church with the kids in tow. Try and smile, make a few jokes about it. People give you a few patronizing hugs, other’s are like ‘rough’ did you watch the Leafs last night?

Whatever my bike’s stolen. Wonder what that guy … er gal is doing with it? Wonder if they’re using or selling? Wonder if I could find it on kijiji? 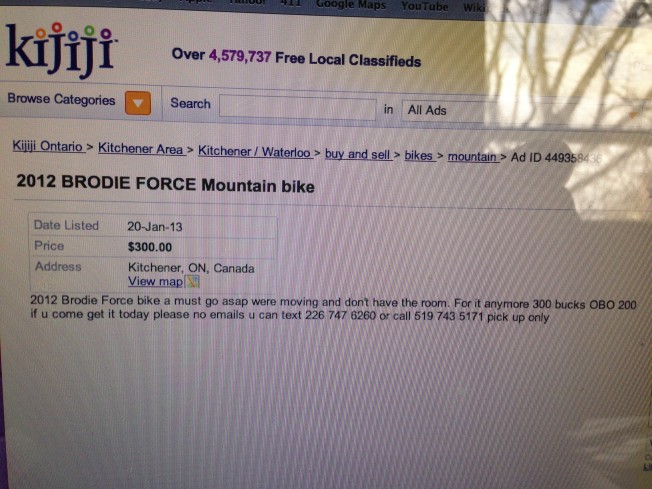 So you follow the instructions and text the guy. Hey dude, how’s it going? Yeah, I’m interested in your bike. Now you’re on the phone with the guy.

What would you do?

Well my buddy didn’t call his friends or get his baseball bat. He called the police. And they were like, ah we’re busy, bigger fish to fry. My buddy was like, dude you’d be here if it was a car. I need to get to work tomorrow. I’m picking it up in 30 minutes, do you want to send someone to go with me?

The police showed up in 30 minutes, but wouldn’t let my buddy come along. They dropped by later with the Brodie Force, minus a bunch of components. The seat post was different, the fenders were gone and two digits of the serial code were scratched off.

Worse there was no arrest or charges. The police officer said there wasn’t enough to go on. When he showed up the guy in the house (who was actually moving) said some stranger borrowed his phone. Apparently it was a boarding house with lots of people in and out. The police officer went around the house.  Found a door propped open by a mason jar. He looked in, saw the bike so he grabbed it. Then took it back my buddy. Apparently no real evidence to prove anything.

Horrible. Just horrible. Now my buddy had the police steal his bike back, pissing the thief who knows where my buddy lives, who has a family and small kids.  Is stealing a bike that inconsequential?

So in the end.

Bike’s returned, but without the piece of mind. (To saying nothing about our confidence in our justice system.)

5 thoughts on “My friend’s bicycle was stolen this morning”