My ultimate winter bike has one fault.  When riding in snow, ice builds up on the rear cog and promptly lifts the belt off the rear cog.  We’re not talking deep snow, just an inch or two of fresh snow produces enough build up of ice on the belt to pop it off.

The first time it happened (day two of my Trek experience) I called up the cycle shop where I purchased the bike and explained it to them.  I got the impression they didn’t believe me.  So I turned to the internet, wrote my first post and placed some other reviews of bikers who had the same experience and sent it to them.

I also called Trek and explained it to the them.  William from Trek then told me they had mailed a rear cog (second post) with cut-aways to clear debris,  and were mailing it to the cycle shop.

Well a month later and after several phone calls, I got a message stating the part arrived (by donkey or something) but it wasn’t going to work.  As it turns out the picture William from Trek had showed was that from the Trek District and that rear cog doesn’t fit the Soho’s Shimano Nexus hub. Ziggy’s said to come in and they’d show me some silcone lubricant that should keep it clean.

Asked for my money back

That straw broke the camel’s back. I called up Ziggy’s and asked for my money back. They were like what are we going to do with a used bike … I was like ‘What am I going to do in the winter with a bike that won’t work in the snow’.

The compromise we reached was to see if Trek would cover the cost of converting the Soho DLX to a chain driven bike. Here’s the end  result! 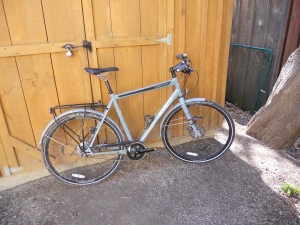 Found another belt drive cyclist who had to switch back to the chain – http://mnbicyclecommuter.blogspot.com/2011/01/hey-what-happened-to-belt-drive.html